North Carolina Handicapped Sportsmen “Back In the Woods” Hunt near Bear Creek, NC 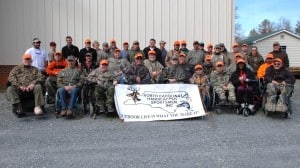 "Back In the Woods" Hunter & Guides

The following is the narrated audio in the above video:

So now that the holidays are over, I finally have time to share my pictures and remember November’s “Back In the Woods ” hunt in Bear Creek, North Carolina.  Twenty wheelchair hunters were offered two days of hunting with all food and accommodations provided free of charge over the weekend of November 18th and 19th.  It was a huge endeavor spearheaded by 1995 Professional Bull Rider, Jerome Davis, paralyzed since 1998, and made possible with monetary contributions from numerous corporate sponsors and individuals alike; and just as importantly, with the help of the community of Bear Creek.

There certainly are some big hearts in Bear Creek.  What can you say about all those landowners who opened up their properties and set up blinds and cultivated just the right spot to allow the greatest opportunity for each disabled hunter to harvest a deer?  Even though deer season had been opened for well over a week, some of them had waited and not hunted themselves: leaving that pristine territory for those to come. A lot of credit needs to also be given to Tommy Estridge for helping to get the whole thing organized.  He’s been friends with Jerome since before 1998 when Jerome was thrown from a bull, paralyzed, and instantaneously found himself one among millions of disabled Americans dependent upon a wheelchair for their mobility.  Tommy accompanied Jerome on another hunt organized for the disabled in Alabama and both men came back with ideas about providing such an event, back home in Bear Creek.  Through their partnership with the North Carolina Handicapped Sportsman (NCHS), those thoughts became reality.

Tyson’s Creek Baptist Church Recreation Center provided the perfect venue for all of us to gather. With so many hunters, Van Products supplied two vans and one of our lead technicians, Stacy Scott came along to help me get folks into the woods.  Having a technician around proved useful since word spread and we were immediately asked questions in regard to several transportation issues that a few of the hunters were having with their existing vans.  Stacy loves to hunt and really enjoyed helping out even if it did mean getting up at 4:30 on Saturday morning.  We took hunters into the woods by truck, by van and by 4-wheeler -often with a scooter or chair piled on the back.  The mass exodus from camp was filled with anticipation.  Blinds high and blinds low were ready and waiting.

As with every hunt, there is always a special feeling of excitement you sense whenever there are “young” hunters around.  This event introduced us to Ethan Freeman, Danny Glenn and Noah Ward.  Noah attended with his dad, Mark and his mom, Janet.  (Sometimes I’m not good with remembering names but those were amazingly easy!)  I met Danny Glenn and his family at an event last year hosted by Braggtown Baptist Church in Durham.  Van Products has provided transportation and door prizes for Braggtown’s Luke 14 Banquet for the past two years.  It was great seeing Danny enjoying a father-son outing with his dad, Walter.  Both Noah and Danny had successfully harvested deer by lunch on Saturday and although Ethan had not, his guides were set to take him back out Saturday evening.  After another disappointing hunt, they made arrangements for him to come back two weekends later and he was finally able to get both a doe and a button buck!  Thank you to all those who did whatever it took, for ever how long it took, to make that happen.

Charles McLeod and his wife, Martha were hunting again which was particularly remarkable in light of the fact that his foot was still bandaged from having to be partially amputated just a couple of weeks before!  It was great to see them and to hear of their upcoming plans to celebrate their 50th wedding anniversary on a four-month cruise around the world!  Mr. McLeod’s chair sure has never slowed them down and he can always be counted on to bring down a deer.  Roger Kidd is also a familiar face to Van Products as is Joe Kirkpatrick.  They also were successful hunters and seemed to really enjoy the event.

The greatest success story has to be that of Dale Wolf.  Dale was involved in an automobile accident some 17 years ago.  I believe he told me he was 19 at the time and had only been hunting once before he was paralyzed, and not at all since.  He didn’t even own a gun.  I’m not sure who loaned it to him but it must have been a good one because his aim was dead on and he brought down both the largest buck- 7pts, 162lbs- and the largest doe with that 243 rifle.    Befittingly the prize for both was a brand new rifle.  So now, he owns a gun.  Since Dale won a rifle for the big buck, the prize for the biggest doe was awarded to the runner up in that category, Alan Bracket.  I overheard someone ask Dale if he planned to have that beautiful buck mounted.  When Dale said no because it was just too expensive, that problem was also remedied by the big hearts and generous pockets of Bear Creek.  I guess you could say Dale had a pretty perfect weekend

There were others that harvested two deer also.  One was Jim Goodwin of China Grove.  He was the first one back on Saturday morning and his guide, Ennis Loflin, said Jim was deadly with this 270 Remington.  From about 150 yards he took the buck down and while waiting to get that one loaded, caught sight of the doe and got her as well.

Even though I’ve only mentioned a few of the hunters that went “Back in the Woods”, I saved my favorite for last.  Maybe it’s because she was the only female disabled hunter there; or maybe it’s because she’s a veteran who served her country well and who learned all about guns while in service.  Like Dale, she didn’t own a gun but in the military you don’t own the guns they give you there either.  Or maybe it’s because I have to admire a person who broke through every barrier just by showing up -whether it be color, gender or size!  Twila Adams is an attractive petite woman that you can’t help but like.  She and her guide, Tracy Stamey kept me smiling. Tracy hunts regularly and wore her pink accented camouflage gloves and gun bag with a style all her own.  Keenan and Deanna Jones set the ladies up on the backside of their property that Deanna often uses herself. Keenan’s another one of those men that made the mistake of letting his wife come along hunting.  Now she loves to hunt as much as he does!  They were like proud parents when both Twila and Tracy each got a deer.  Twila’s doe and Tracy’s button buck were both small but the excitement of Twila’s first time deer hunting and first conquest was huge, and her smile was even bigger!

All in all it was a great weekend.  Great hunting, great food (thanks Bear Creek ladies), great music…Legends and Outlaws came all the way from Virginia to entertain us, great fellowship and great fun.  Even Keenan and Deanna’s dog had a great time, and we’re hoping he lets us “back in the woods again” next year.