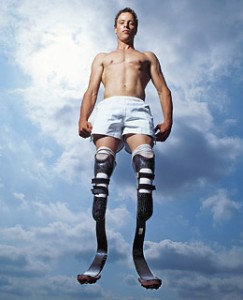 Infamously nicknamed the “Blade Runner” and “the Fastest Man on No Legs”, Oscar Pistorius is a record-setting South African sprinter who has, though relentless effort and training, more than transcended his disability.

Since having both legs amputated a month before his 1st birthday, Oscar has learned to live and excel despite his handicap.  Growing up, he played rugby, water polo, and tennis.  After being forced to abandon these aspirations following a serious knee injury, he was instead encouraged to channel his energy into running, which he has pursued to astounding success ever since.

Today, Oscar competes as a runner in the 100, 200 and 400 meters events, wielding a pair of prosthetic leg replacements.

As the all-time world record holder in each of his events in the Paralympics, he has, on multiple occasions, attempted to qualify for the regular Olympics. Remarkably, he was blocked from qualifying on the grounds that his prosthetic limbs constituted an “unfair advantage” over his competition.

Eventually, after an overturning of the original ruling, he very nearly made the 2008 Olympic Games in Beijing, but failed to meet the minimal qualification time to make the South African team. Instead, he participated in the Beijing Paralympics, claiming the gold medal for the 100, 200 and 400 meters races. Oscar Pistorius is a testament to the abilities of handicapped athletes to compete at an equally impressive level as those without physical impairments.

Though his running successes are amazing, what is most inspirational to us is the fact that he figured out how to channel his energy and life focus, in spite of circumstances. Whether that is art, community service, education or family, we encourage you to find a way to channel your energy for life into something you love, regardless of your circumstances.  We are hoping to see Mr. Pistorius qualify for the London 2012 Olympic Games.

Although Oscar Pistorius has mobility options outside of a wheelchair solution, that isn’t always an option for many within the handicapped community.  Dealing with that reality, whether from a wheelchair or as a caretaker, can be an adjustment, so we are here to serve as a resource for you. Let us know if you need tips for making your home wheelchair accessible, ideas about travel or a wheelchair accessible van to help you on your way. Drop us a note! 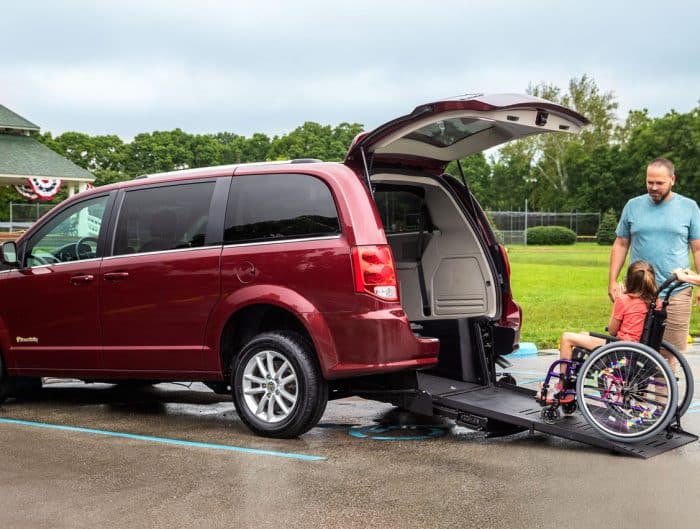