The 12th annual “Kids Day” took place Wednesday, June 27, as part of the National Veterans Wheelchair Games this summer, and several of us with Van Products had a chance to spend some time with one very special kid…

Kids Day is a special time set aside for children with disabilities to have a chance to interact with the wheelchair athletes attending the Games and experience the world of adaptive sports. A group of dedicated wheelchair athletes took time from their competition schedule to develop the kids skills at three adaptive sports:  softball, basketball and wheelchair slalom.  Here’s a short video clip to give you an idea of what Kids Day is like.

“Kids Day is the highlight of my week, and I wouldn’t miss it for the world,” says Joey Avellone, a U.S. Marine Corps veteran and Paralyzed Veterans’ member and one of this year’s Kids Day mentors. “In addition to showing the kids what adaptive sports are all about, I want to tell the kids about the importance of an education and that they can become anything they want using their brain—that a good education can overcome any physical disability.”

Giving Back After the Wheelchair Games

After participating in Kids Day, some of the veterans who served as mentors there have gone home and continued giving, including Van Products’ Johnny Holland from Goldsboro, NC, who found opportunities in his hometown to introduce children to various adaptive sports.

“At home, I volunteer at schools sometimes to help kids with disabilities,” Holland said. “It’s a way to give back (to society) and a way to educate the kids and parents.” 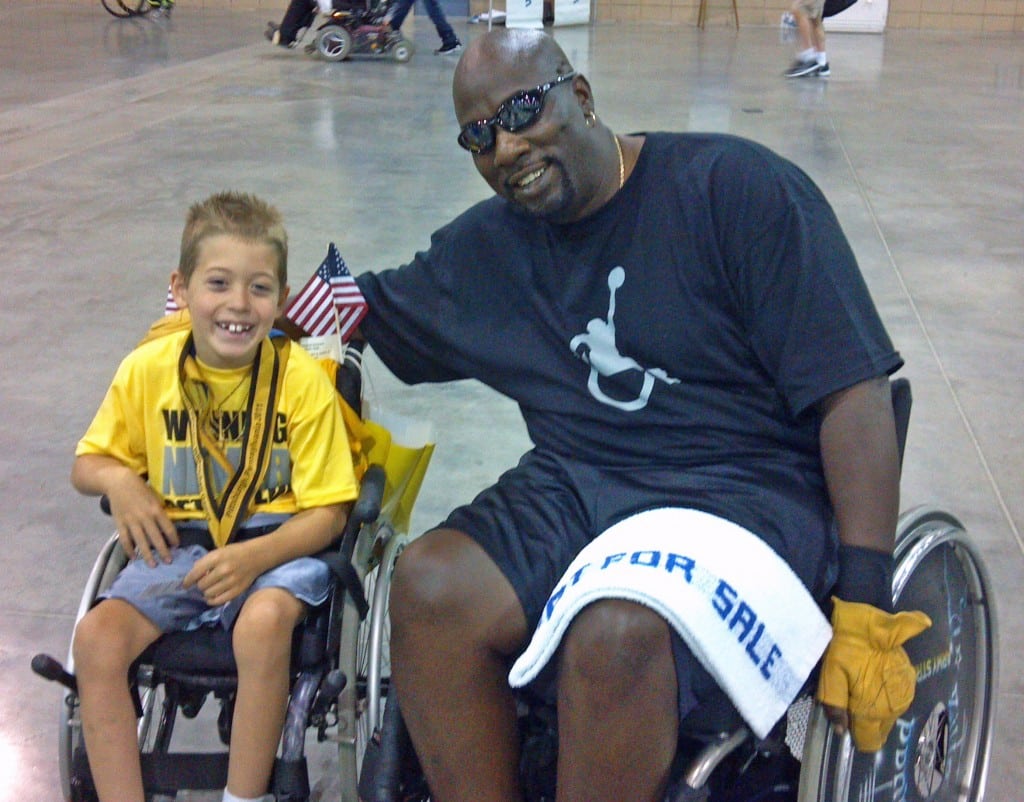 Johnny also goes by the name “Quadzilla” which caught the attention of young Dominic Ruperto when the Games were in Pittsburgh, PA in 2011.  Dominic’s mom, Michele, wanted her 7-year-old to have the chance to participate in some of the athletics that were featured at the Games.  Dominic and everyone else at Kids Day had a tremendous time together at his first Kids Day last summer.

But he and his mother went to those games specifically to see if they could meet “Quadzilla.”  Dominic saw him in a TV commercial promoting the games, and he just had to try to catch up with him at the Games last year.  Sure enough, they found him at the Kids Day event, and Dominic and Johnny got a  chance to become friends last summer.

This year Dominic, who has cerebral palsy, and his mom made the trip all the way to Richmond, VA to catch up with Johnny and the other Veterans.  They spent time laughing and teasing with each other, and generally just had a great time hangin’ out.

Carving A Path to Adaptive Sports

President of the Paralyzed Veterans of America [source: http://www.pva.org/site/apps/nlnet/content2.aspx?c=ajIRK9NJLcJ2E&b=6350111&ct=11204225], Bill Lawson, said Kids Day is likely to start many children on paths to adaptive sports.  “It’s a very important event at the National Veterans Wheelchair Games,” he said. “It allows some of us to come out and introduce younger folks to sports they can do. It shows parents that it’s important to start the kids in sports.”

“He met so many people and just really developed so many friendships,” Michele said. “To Dominic, the athletes here are gentle giants. And he sees the potential for an active lifestyle when he watches them.”

Dominic has kept close ties to some of the participants he met last year, and Johnny tells us that some of them got together to help with travel expenses for Dominic to attend the Games this year.  Dominic, now 8, participated in the day’s events along with about a dozen other children. Veteran athletes stayed close by and taught the kids skills in their designated games.

In 2013, the Games will move farther away from Dominic’s home in Pennsylvania, but that won’t keep him away from Kids Day!  Many of the Veteran’s who helped with the expenses of getting him to this year’s Games have already made it clear that Dominic will be at the Tampa Games [https://blog.visittampabay.com/blog/tampa-bay-sports-2/tampa-selected-to-host-national-veterans-wheelchair-games] in 2013.