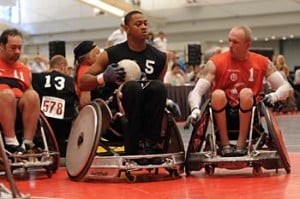 The National Veterans’ Wheelchair Games were first held in 1981 in Richmond, Virginia.  Since then the games have grown from seven events and 74 athletes, to 600 athletes and 17 events.  Last year’s games in Pittsburgh, PA were a big success with many athletes coming from well beyond the east coast.

After a successful inaugural event back in 1981, the Virginia Mid Atlantic Chapter of the Paralyzed Veterans of America and the Richmond VA Medical Center will host the games at its original site June 25 – 30, 2012. The National Veterans Wheelchair Games will be held in downtown Richmond at the Richmond Convention Center and at various other venues throughout the city.

Athletes are all military veterans, and in the 2011 games, they ranged from newly injured Vets from recent conflicts to a 90 year-old veteran of World War II.  Vets quickly develop a sense of camaraderie which continues outside the competitive arena long after the games are over.   Be sure to make plans to attend the games in Richmond…the events are free to the public, and like in all other sports, the athletes love to play to a big crowd!

Van Products friend, Johnny Holland had a great showing in the 2011 Games in Pittsburgh and he plans to compete in the Richmond Games as well.

Volunteers are always a very important part of the success of events like this, and if you would like to help out as a volunteer during the National Veterans’ Wheelchair Games, here is the registration form, and here is the application form.

If you are a wheelchair athlete and would like to participate, you can visit the athlete information page [https://www.pva.org/site/c.ajIRK9NJLcJ2E/b.6305971/k.327F/Games_Registration_Information.htm] to learn more.  All of the rules for eligibility are explained there.

All registrations are due April 15th, 2012, so don’t wait too long…see you there!